Ljubljana, the 2019 Index’s smallest city, is a still a breeze to visit: green, livable, bike-friendly. But it has stagnated a bit since our last analysis and the city needs to keep up. Innovation and consequent implementation are needed more than ever. – Morten Kabell, CEO of Copenhagenize

Although the Slovenian capital city slid down a number of spots on the Index this year, it still most certainly deserves its space among the Top 20 in 2019 for its continued push for innovation and bicycle-friendly development.

At 13% bicycle modal share, Ljubljana is a small city that continues to enjoy a cycling population of all ages and abilities, as a mainstream transport form for many. A large number of City plans incorporate cycling in some important way, from the Sustainable Energy Action Plan to the Electromobility Strategy – the bicycle is taken seriously as an element important for healthy city development. And the City has been getting accolades to back this all up – grabbing second place in 2018 survey by the European Commission for accessibility. Ljubljana also sees a balanced gender split for bicycle users, while Slovenia has been regarded the world-over as one of the world’s best countries for women.

The last two years featured a number of new developments to cycling in the City, with the highest ever ridership numbers recorded for the local bike share system Bicikelj, and a number of one-way streets made accessible to cyclists travelling in two directions. Additionally, new intersection designs and traffic lights for cyclists have been consistently rolled-out since 2018, as well as car-free and reduced speed zones were expanded on the local territory.

“
... there has been no break in the use of bicycles due to the arrival of automobiles, as happened for example in the UK. A lot of people still ride bikes, including the young, old and women, which is a great sign.
Lea Ružič
President of Ljubljana Cyclists Network

Looking at where Ljubljana needs to pick up the pace if they hope to stay in the Top 20, we see a number of issues surrounding bicycle parking across the city. Secured parking spaces, especially near transit and schools can be hard to find, as this creates an enormous barrier to entry for new potential bicycle users. Outside of the centre there are a number of interruptions to the cycling network, lacking design standards for protection and width, and maintenance problems through winter. These are no small feats, but essential if Ljubljana truly wants to become bicycle friendly! 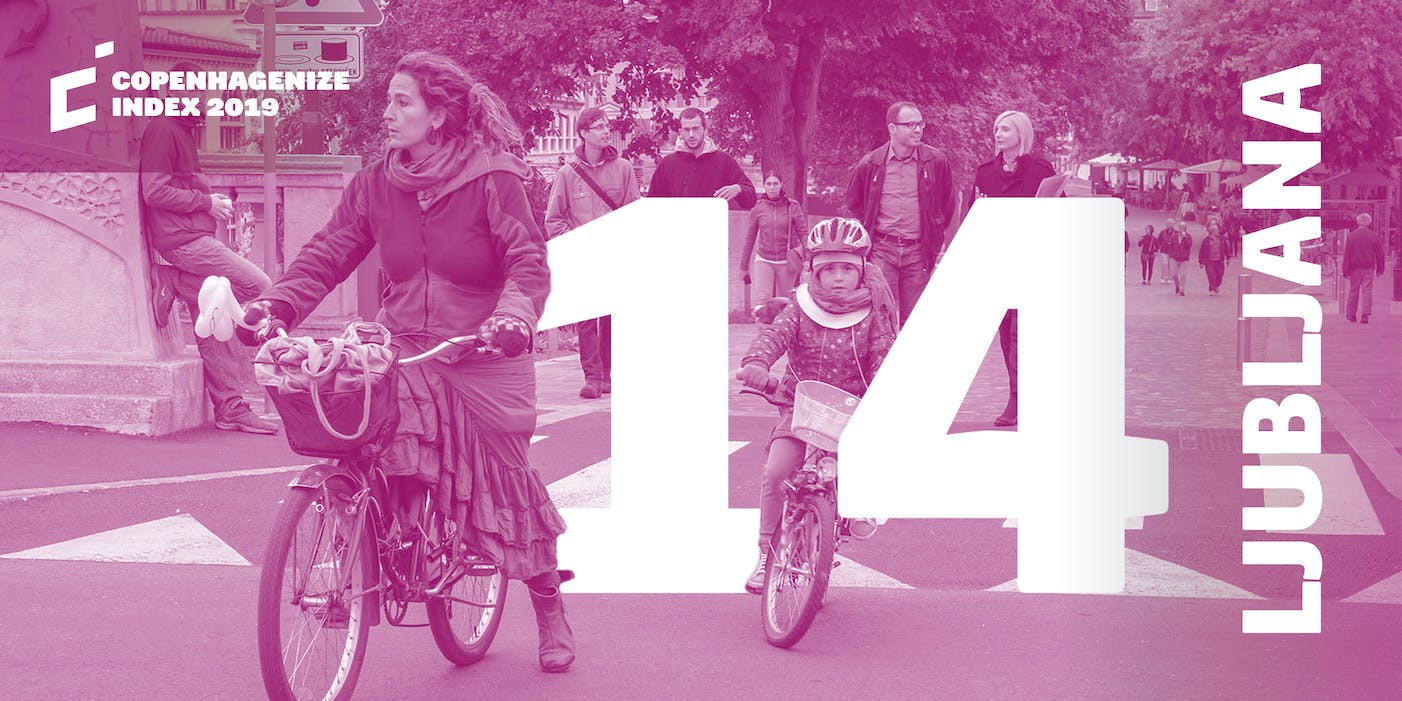