With approximately half of its citizens living on less than $1.90 USD per day, Nigeria has the highest poverty rate in the world.

Compounding this inequality, urban areas of Nigeria face a garbage crisis, exacerbated by poor political organization and ineffective waste management systems. Lagos, Nigeria’s largest city, has a population of 21 million, but only 40 per cent of its waste is collected, and just 13 per cent is recycled. Some residents have turned to trash burning as a waste management tactic, only adding to the pollution caused by heavily congested roads and unregulated car emissions. 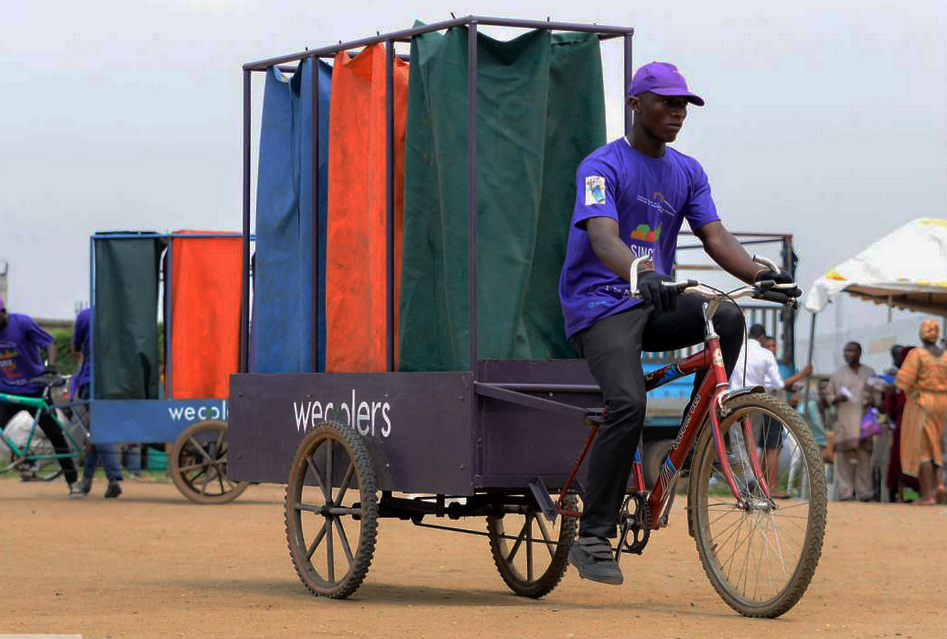 To combat poverty and pollution, Bilikiss Adebiyi-Abiola, a local who received her MBA from the Massachusetts Institute of Technology, started Wecyclers, a cargo bike-powered recycling program that offers financial income to both its employees and participants. The social enterprise picks up recycled goods from homes and businesses once per week, sorts the waste, and sells it to Nigerian recycling companies. When Lagos residents register their households (free of charge) or businesses with Wecyclers, they receive points for every kilogram of recycled goods they supply, which they can then exchange for cash or household items. Compared to cars, cargo bikes can travel down narrow corridors where cars do not fit, allowing Wecyclers to bring waste management services to crowded neighbourhoods in need.

“Even when people do want trash collected, the road network is too challenging,” [Bilikiss] explains. “People park, double park, even triple park. It’s impossible for vehicles to get to it.” (Athlyn Cathcart-Keays / The Guardian)

Recently, Wecyclers partnered with the Lagos State Government to expand its coverage, set up recycling hubs, and establish community awareness programs. There’s no reason why this cargo-bike-powered recycling system can’t be applied to cities all around the world. Simultaneously providing financial benefits to its employees and city residents and creating a cleaner, more livable urban environment, Wecyclers shows the way of the future for our cities.

“Now, we’ve noticed that we’ve stopped actively reaching out to households to register people as more and more are coming directly to us. They want to be part of the movement,” Bilikiss says. “People see their friends getting rewards for clearing up, and they want the same thing. The incentive is there and people are really keen to do it.” (Athlyn Cathcart-Keays / The Guardian)